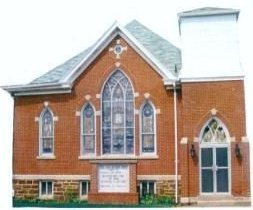 On a Friday night, May 25, 1893 a group of twelve met at the home of George Brown. Their purpose was to establish a Brethren testimony in the city of Altoona. In June, 1893, the group rented Kipple’s Hall on 12th street and worshipped there until the end of that year. Rev. W.L. Spanogle, pastor of the Martinsburg and Vicksburg churches, was a frequent speaker. The group then moved to the Millville School House at the present site of the Curtin Grade School.

Rev. Spanogle became the first pastor of the church on February 15, 1894. The Altoona First GBC was organized on April 1, 1894 with a charter membership of twenty-seven. That same month the church held it’s first evangelistic meetings. By the end of June the church membership had grown to forty-seven and the Sunday School and Ladies Aid had been organized.

By November, 1895, the congregation had grown to seventy-four and began looking for a place to build. The present lot at Maple Avenue and 30th street was bought in January, 1896 for $500. A building bought from the Broad Avenue Presbyterian Church was moved to the site, remodeled, and dedicated July 19, 1896.

By the time of the ministry of Rev. J.H. Knepper, that building had become inadequate, and a building program was begun. The present building, designed by W.A. Harman, was completed in early 1912 and dedicated March 3 of that same year. The congregation met in the old building and marched next door to the new building signing “Onward Christian Soldiers.” The old building was moved to the corner of 30th street and used as a dwelling.

During the ministry of W.C. Bensoff (1915-1920), the membership increased to 200, the Sisterhood of Mary and Martha was organized, and a house on Maple Avenue was purchased as a parsonage. It was later sold and the present parsonage was erected in 1923.

In 1937, Pastor R.L. Rossman and a committee of members drew up the first constitution for the church. He also discovered that the deed had for 26 years been in the name of S.R. Smouse, who had served as the first church secretary. During Rev. Rossman’s ministry, the Alexander Mack Brotherhood was organized and the parsonage debt was liquidated.

Rev. Raymond Blood became pastor in July, 1942 and directed the refinishing of the Church basement. Because of the scarcity of materials and labor, the work was done by the men of the church. The dedication took place during the 50th Anniversary of the church in 1943. Several years later, in 1946, the organ was installed, and in 1947 the church celebrated with Sheldon Smouse, who had served for fifty-three years as choir director.

During the second ministry of Rev. Rossman there was a marked increase in missionary giving, and two Brethren Youth Fellowships were organized. In 1948, Brother E.F. Shaffer organized the boys of the church into a Junior Alexander Mach Brotherhood. While Rev. Mark Malles was pastor, there was an active membership roll of 149 and an inactive roll of 135. Several new Sunday School classes and a Junior WMC were formed. Foreign Missions giving reached an all-time high of $2,000 in 1953.

The ministry of Rev. Ralph Burns was the longest in the history of the church. During this time a strong youth group developed, and Sunday School attendance averaged 130.

Rev. Mike Volovski became pastor in 1977. In 1983 he and his wife Amy went to the Central African Republic as missionaries, and the church continued to contribute to their support

The ministry of Pastor Richard Horner was marked by the development of a Vacation Bible School, which ministered to over 200 children each year and became well known in the community. During the Pastor Horner’s ministry, Barry Rowe, a member of the church and director of Child Evangelism Fellowship of Blair County, was licensed as a minister from the church. When Pastor Horner accepted a Call to Kokomo, Indiana in September, 1991, Rev. Rowe agreed to serve as interim pastor. He accepted the call as pastor on March 1, 1992.

(During the ministry of Rev. Rowe he helped start a child’s group meeting that met on Wednesday nights that outreached to neighborhood school children. In 2000, Mike and Amy Volovski retired from being missionaries, but today we still donate money to help current missionaries. In 2001 , Rev. Rowe decided it was time to step down as pastor at Altoona First GBC. He is currently in Richfield, PA trying to start a new Grace Brethren Church.

Altoona First GBC went 3 years without a pastor. The Church grew together and prayed for the Lord to lead the right person for the job. The Lord found that person on March 28, 2004. Pastor John Townsend was voted in as our new pastor. The Pastor and his wife traveled each week from Virginia to Pennsylvania to join us on Sundays. Pastor John announced on November 6, due to circumstances that had arisen, he could no longer be with us after November.

So again we had the hard task of going without a pastor. Pastor David Taylor from The Door in Bellwood filled in on most Sundays. In late November of 2006, Pastor Townsend realized that the Lord still wanted him in the Ministry. After much prayer the Lord would make it possible for the Townsends to return long term. The Official board recommended that because he resigned before, the congregation should vote on him as a new candidate. On December 17, The Vote was held and the Townsends were accepted by more then 2/3 majority.)

Written by Richard C. Beach*. We lovingly dedicated this history of the First Grace Brethren Church of Altoona to his memory. He was taken to be with the Lord January 28, 1993.

* The parts in the ( ) was not written by Richard Beach.